Who is Christine Taylor?

Christine is a 22-year-old mother of two who is pregnant with her third child. She lives in Burlington, IA. She was wrongfully charged with "attempted feticide" after falling down the stairs of her home.

On January 19, 2010, Christine fell down her stairs, and out of concern for the health of her pregnancy, she went to her local Emergency Room for a checkup. There, she confided in a nurse that her marriage was in jeopardy, and that she had ambivalent feelings about her pregnancy and about life as a single mother of three. This innocent expression of distress was interpreted by the nurse as a statement of malicious intent toward her unborn child. In violation of Christine's confidentiality, hospital personnel called the police, who interrogated her while in the hospital. That evening she was arrested on a charge of attempted feticide, and spent two nights in jail.

National Advocates for Pregnant Women is now involved in the case, and fortunately, this charge has been dropped. But Christine is under an enormous amount of stress, with no real support network. Her apartment was robbed shortly after she was released from jail, and her tax return was stolen. That money was to go directly toward housing, transportation, child care, and other necessary expenses associated with the birth of her third child. She is planning a VBAC for her upcoming birth.

This donation site was created for the purpose of helping Christine recover her losses from the theft as she prepares for the new addition to her family. Please donate to help Christine Taylor today. Donations will be accepted until May 1, 2010.

Related links:
"I never said I didn't want my baby": Mom won't be prosecuted
Pregnant? Don't Fall Down the Stairs
Posted by Monica at 9:08 PM 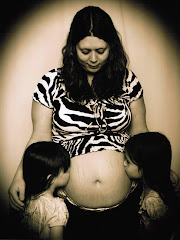 Christine and her girls